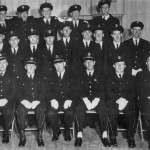 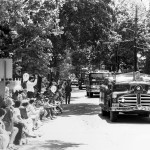 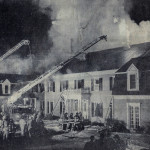 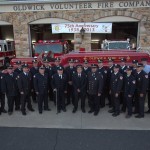 The first record of a fire company in Tewksbury Township, was on October 8, 1923 by the Young People Community Club. The meeting was held to plan fire protection for Oldwick. The first order of business was the purchase of a fire truck. A ‘one ton job’ costing between $1250 and $1500 was voted on. Elected officers included: Chief Charles Hildebrant, Foreman Isaac Hildebrandt, First Assistant Foreman Alan Leets, Second Asst. Foreman John Melick.

The truck was a Model T, and was stored in the Hildebrant Cider Mill on Church Street. The Cider Mill was the ‘center of technology’ in Oldwick in the 1920s. The mill had pumps, presses etc.

The truck was a chemical pumper in which chemicals were mixed to form a gas. The gas pressurized water tanks created the force to move water.

The fire company held several fundraisers including a ‘500’ party and chicken suppers. The first chicken supper turning a profit of $221.11.

In 1924, the fire company purchased additional gear including: fire extinguishers, poles with hooks, extension ladder, rubber coats and hats. Meetings were held in the Van Swick basement and moved to Barnett Hall in 1925

In 1929, the fire company was looking into the construction of a firehouse near Barnett Hall

The fire company disbanded during the 1930s due to the depression gripping the entire nation. There was $192 in the treasury when the company disbanded. The truck and equipment fell into disrepair. It is not known where the truck ended up.

On January 10, 1938, a reorganization meeting of the Oldwick Fire Company was held. Mr. Van Swick is credited with being a moving force behind the re-establishment of a fire company. There was an earlier barn fire in 1935 on Homestead Road, the site of the ‘Clucas Barns’  that was a total loss in part due to the lack of any nearby fire company.

In April 1938 the newly formed company led by Chief Cecil Beavers and President Daniel A. Coughlin, made two major decisions. First was the purchase of a Studebaker Truck Model K-15 with a ‘Drive Away Chassis’ at a cost of $790. A contract was let to the Philadelphia Fire Truck Company to outfit the chassis as a fire truck at a cost of $2395.50. The second was the construction of a firehouse and it was decided to construct a one story wood frame building, with a wooden floor, without heat or electricity for $1234.40.

Land for the firehouse was negotiated with the Methodist Church and a 99 year lease was set.

The membership made several trips to Philadelphia to expedite the new truck, the truck arrived in June 1939.

In July 1939 the new firehouse was completed. The hard work is credited to Mr. Neff, Mr. Van Swick and Mr. Coughlin.

The firehouse was inspected in 1939 by an insurance investigator and it was found that a siren and an additional 150 feet of hose was required.