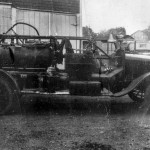 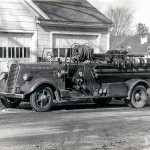 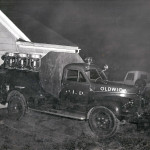 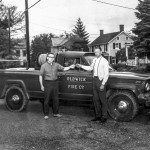 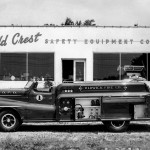 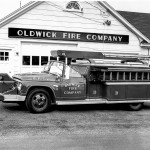 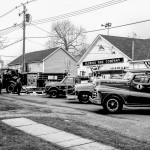 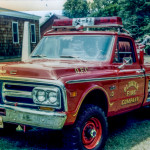 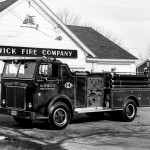 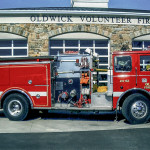 This was the first vehicle purchased by the Oldwick Fire Company and had an estimated cost of $1250-$1500. The truck was a Ford Model T, described as a ‘one ton job’. The truck was a chemical pumper in which chemicals were mixed and gave off a gas which pressurized the trucks tanks and forced water through the hoses and nozzles.

Studebaker with a cost of $1927 for the truck chassis. The total truck price, including a Darley pump was approximately $7000.

The truck chassis was a White. The truck had a 750 gpm Darley pump. The body was built at Gold Crest in Dunellen NJ. This construction arrangement was at a significant savings to Ward and LaFrance options. Dan Coughlin who oversaw the truck construction, drove to Chicago to pick up the truck pump in order to expedite construction. The truck was converted to a tender in the 1980s and was ‘retired’ to parade status in the 1990s. Truck costs were $18,000.

GMC brush truck – This truck, which replaced the 1949 Jeep, consisted of a GMC four-wheel drive pickup body in which the pump was integrated into the truck drive system. The truck total cost was $7,000. The truck, when retired was given to Tewksbury Township road department where it served for several years.

White pumper – The truck body was originally designed to be a garbage truck and was purchased ‘at a good price’. The truck was outfitted as a pumper at a cost of $53,000. This was the last truck purchased with a ‘beavertail’ where firefighters stood on the ‘tail’ at the rear of the truck while riding to fires.

International pumper- This truck was purchased due to the large number of recently installed ‘long and narrow’ driveways built to residential structures. Existing equipment could not make it up some driveways in bad winter weather. Due to the opening of Interstate 78 in the late 1980s, this truck became the first response truck to vehicle incidents as it held cribbing, jacks, ‘jaws of life’ etc. The truck design included a front-mounted pump. The truck was built at a cost of $215,000.

Ford Brush truck – This truck replaced the 1972 brush truck. The design included a ‘skid mounted’ pump system which slid into the truck body. Jeff Hayes oversaw the truck construction including many features installed by Jeff himself including a forward mounted spray system. The truck was outfitted at $39,000.

Pierce Tender – This truck was purchased due to the number of isolated residences that were built within the township during the past 20 years. Homes were built with little consideration to water supplies. In addition, the tender became an integral part of the hazmat tactics for both Interstate 78 and increasing Route 517 truck traffic. While the James Street firehouse was operational, this truck was housed in the James Street Township Garage. The truck was built at a cost of $425,000

Chief Vehicle- This used, 1995 Chevrolet Suburban was outfitted as a command vehicle at a cost of $14,400

Utility – This vehicle plays a newer role at the fire house and is used for transporting members and gear to and from incidents and events. The truck is an F-350 Ford with custom body.

Want to see our current apparatus?

Find out more about the vehicles that we’re currently using